In today’s sociopolitical environment, Islamophobia enlivens a modern form of racial prejudice: the conflict between Christianity and Islam is not new, it extends centuries into the past predating even the Crusades. It’s deeply entrenched in American government, modern political discourse, and determinations of who was a citizen and who was not. But as a consequence of the war on terror, and fear-mongering rhetoric of politicians like President Trump, the bigotry has been given an unsuspecting population to spread. Modern media, liberal or conservative, indoctrinates polarizing views of Islam as being a religion that is entirely antithetical to the West. State-sponsored Islamophobic programming designed to instill support the “war on terror”, encourage the belief that Muslims are pariahs that are in need of policing and being dealt with by the government.

Currently, oil interests in Middle Eastern countries, which are predominantly Muslim, are vitally important to the US economy. A continued military presence in the region which drives down the price of oil can be justified by fighting terrorism. Oil lobbies offer generous contributions to political candidates in exchange for continued support for political support for military presence in the Middle East. This economic interest in anti-Muslim sentiment is also expressed by the military-industrial complex, whose funding has increased more than 50% following the terror attacks on 9/11. It is vital that people understand that Islamophobia is being spearheaded by state policy, not merely individuals on the fringe, and it is deeply entrenched in the American psyche. 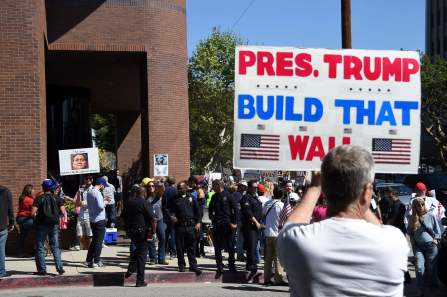 This racialized hatred is not limited to Muslims, it also impacts those in Latinx/Mexican communities and many others who are predominantly non-Muslim. Contrasting xenophobia that targets Muslims, xenophobia that targets Mexicans show historic roots in economic necessity. When the economy flourishes, and companies are in need of low-wage workers, Latinx are the go-to-help. But when the economy declines, anti-Latino sentiment rises, and are blamed for stealing jobs from “hardworking Americans”. Despite being critical to the U.S. economy and often being US citizens, Latinx are discriminated on anything from the color of their skin to their language to country of origin. Historically, Anglo- Americans have viewed Latinx as an underclass of foreigners and stereotyped them as stupid, lazy, and undeserving.

While a multitude of prominent politicians blame unemployment and a struggling economy on Mexicans stealing jobs, researchers like Lawrence Katz, an economics professor at Harvard who studies labor and technological change, disagree, “ Over the long haul, clearly automation’s been much more important – it’s not even close.” Technology, however, is not as easy to blame as China or Mexico, and the economic contributions of technology companies cannot be overlooked nor can the deep reliance most individuals on technology. Today, over 54 million Latinos live in the United States, and are the largest minority in the United States, and while strides have been made to afford them equality, many continue to face racial bias and hate every day.