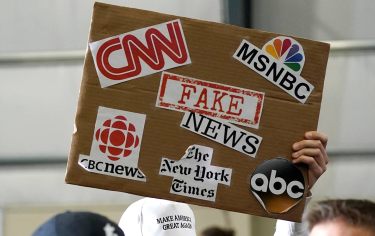 While the United States has traditionally been known as a beacon of press freedom and defender of journalism, in recent years, campaigns of fake news and anti-press rhetoric have undermined the role of a free press in a democracy. Historically, since the creation of the First Amendment, journalists and the press have been responsible for keeping a check on power. Delegitimizing the news is a method to convince people that the only truth is the truth that comes from the government, the ultimate power. Anti-press rhetoric paired with inflammatory language is responsible for an increase in threats against journalists and reporters and will ultimately lead to violence.

A disturbing amount of politicians have joined the attack on the press, seeing the attacks as a way to rally their base and distract voters from the weaknesses of their own candidates, without having to answer specific allegations. Currently, the highest of elected officials single out and attack individual journalists and press institutions for reporting truths that the powerful would rather have remain hidden, or for pointing out lies as lies, or for questioning motivations that deserve scrutiny.

Of these officials, perhaps the most culpable for this era press delegitimization is the president himself. Trump has frequently used his platform to launch attacks upon the press, and single out individual reports, usually in front of an angry mob of his supporters. He has labeled the media as the “enemy of the American people” thus, paving the way for a distrust of the news. This devaluing of the media enables those in higher offices to govern without the balancing forces of public scrutiny. Donald Trump’s attacks on media outlets he deems “fake news” has sent a message to authoritarian and conservative leaders around the world that it is acceptable to crack down on the press.

Such patterns of delegitimizing the press and dissenting opinions can be seen throughout history, most notably with Joseph Goebbels’ propaganda machine in Nazi Germany. By delegitimizing other sources of news, tyrannical central governments systematically undermine the objective truth. Those who are brave enough to speak out against this censorship of the truth are labeled as unpatriotic or un-American and ostracized. As citizens no longer know where to turn to for the truth, they ultimately turn to the government for the truth, who is then able to create a singular narrative, free of diversity and opposition. Once they are able to do that, the stripping away the essential freedoms and basic rights of citizens can be done with impunity. The freedom of press is the greatest of bulwarks that protects the erosion of all other freedoms and rights that are essential to the functioning of a true democracy.